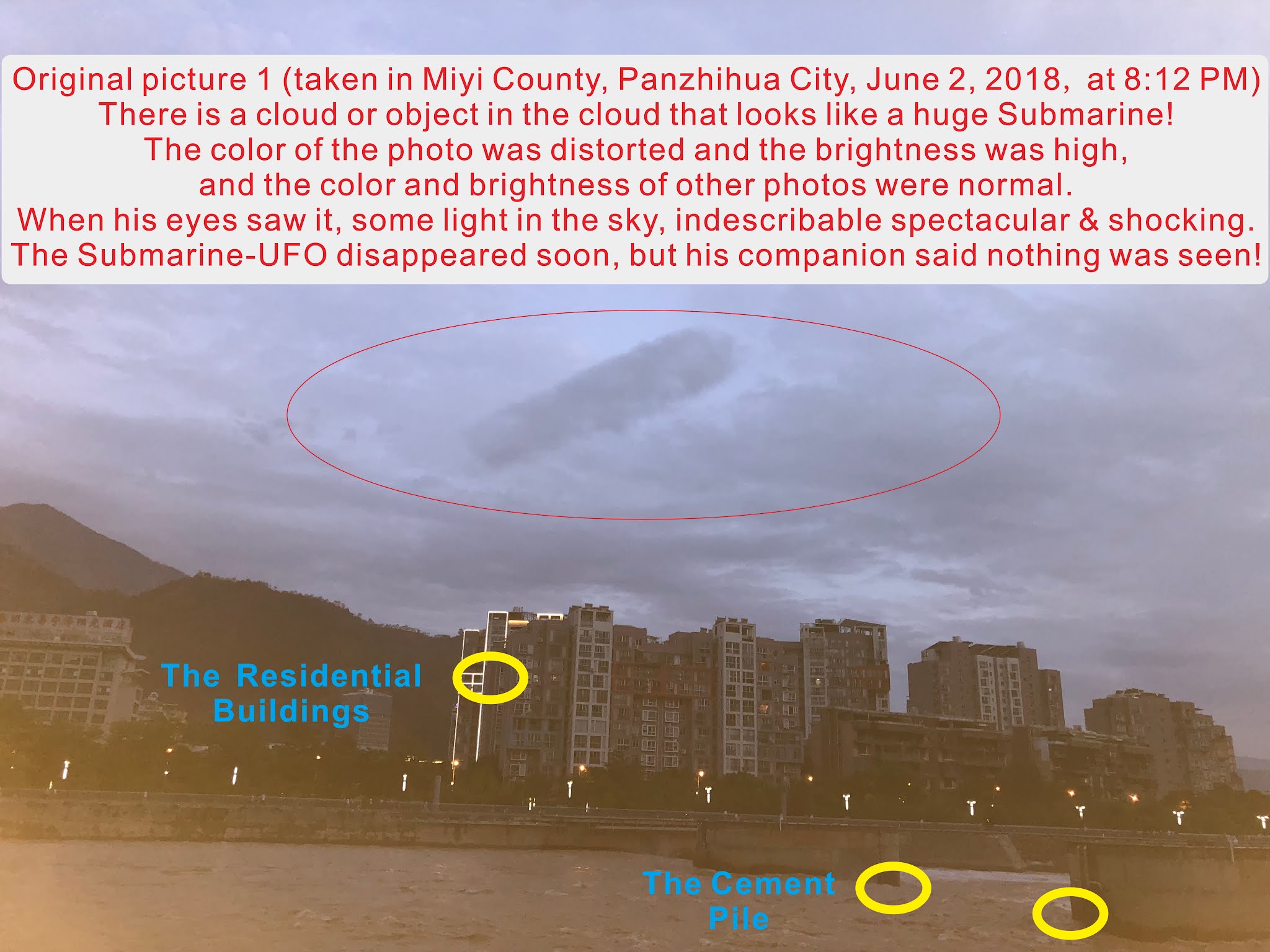 ——If it is just a cloud, the point of the question is why only I can see that cloud at that time?

The sightings were compiled by witnesses in February 2021, in which three aspects were particularly strange:

The story goes like this. Mr. W is a Chinese lawyer, on the afternoon of June 2, 2018, Mr. W and his companion Ms. B drove to County Miyi, City Panzhihua, Province Sichuan to handle some affairs, and to enjoy the scenery on both sides of River Anning and the night scene along the way.

See below the “Aerial view of County Miyi, City Panzhihua”. After driving away from the highway and entering the county, Mr. W parked his car in a parking spot, then together with his companion, Ms. B walked through the Bridge Renminlu below, and then along the viewing road by the river on the left, then they advanced to Bridge Dragon above. 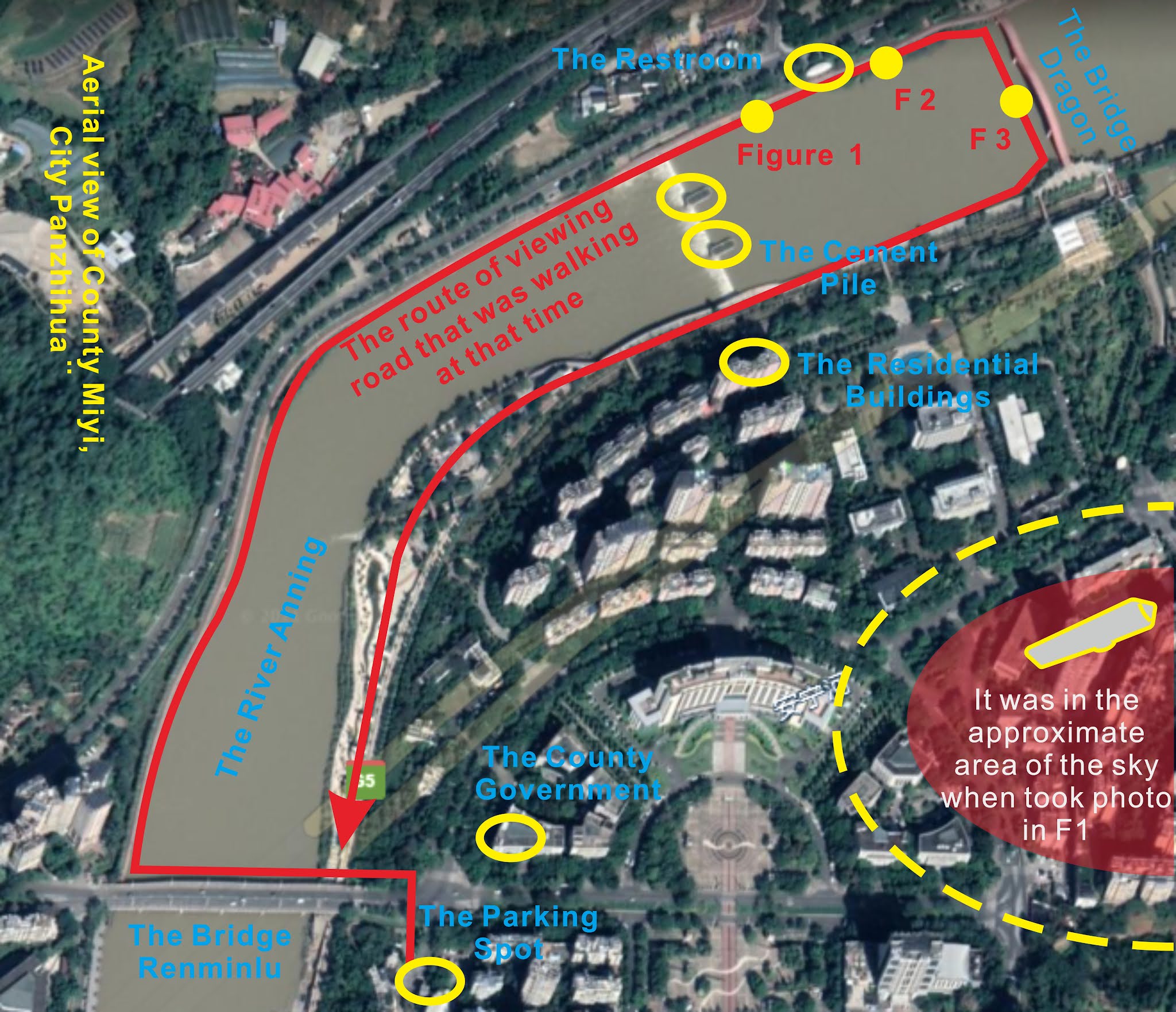 See below “Original Picture 1 (Mobile No. IMG_1631, 20:12 photographed)”. Mr. W, located near the restroom, suddenly saw a UFO-like object, Its shape and size resembled a large submarine, over the buildings across the river. it was silent and motionless and glowed with slight light like the afterglow of the sun penetrating through thin clouds. It was obviously incompatible with the surrounding clouds and was very dazzling and eye-catching. Its magnificence dumbfounded Mr. W. However, the sun should not appear near in the position of Submarine-UFO in the sky at this time, after all, it was already past 8 p.m.

Mr. W immediately took a picture of the Submarine-UFO with the iPhone X in hand at the approximate position shown in Figure 1, and then couldn’t wait to see the details of the UFO through the zoom function of the mobile phone. But it was quite inconceivable that the photo had a serious color cast (or/and the brightness was high) and was very unusual, far from what Mr. W had witnessed with his eyes.

The reason might be that, to go to the bathroom, Mr. W walked in front of his companion Ms. B. When Ms. B approached Mr. W, Mr. W originally intended to watch the strange object together with her. But Mr. W was surprised to find that perhaps within 10-30 seconds when he looked down at the photos, the Submarine-UFO had disappeared without a trace.

At that time, many people walking along the viewing road of the riverside after enjoying their dinner. People would look at the river and the scenery on the opposite bank. The two banks of the river were very wide, and the huge Submarine-UFO should have been seen or photographed by more people. But what is unbelievable is that Mr. W felt that people were not aware of this UFO, and even his companion Ms. B also said that she saw nothing.

The iPhone X photo has a resolution of 4032 x 3024, 5.88 times the video resolution  1920 x 1080, so Mr. W chose to take pictures and then to shoot a video. However the Submarine-UFO disappeared too fast, and unfortunately, there was no chance to shoot the video.

The 576 million pixels of the human eye is 48 times the 12 million pixels of the iPhone X photo, so Mr. W felt amazed at what he witnessed at the time and how it was completely different from the situation as shown by the photo. It's a magnificence that can never be copied and imagined unless you are personally on the scene! 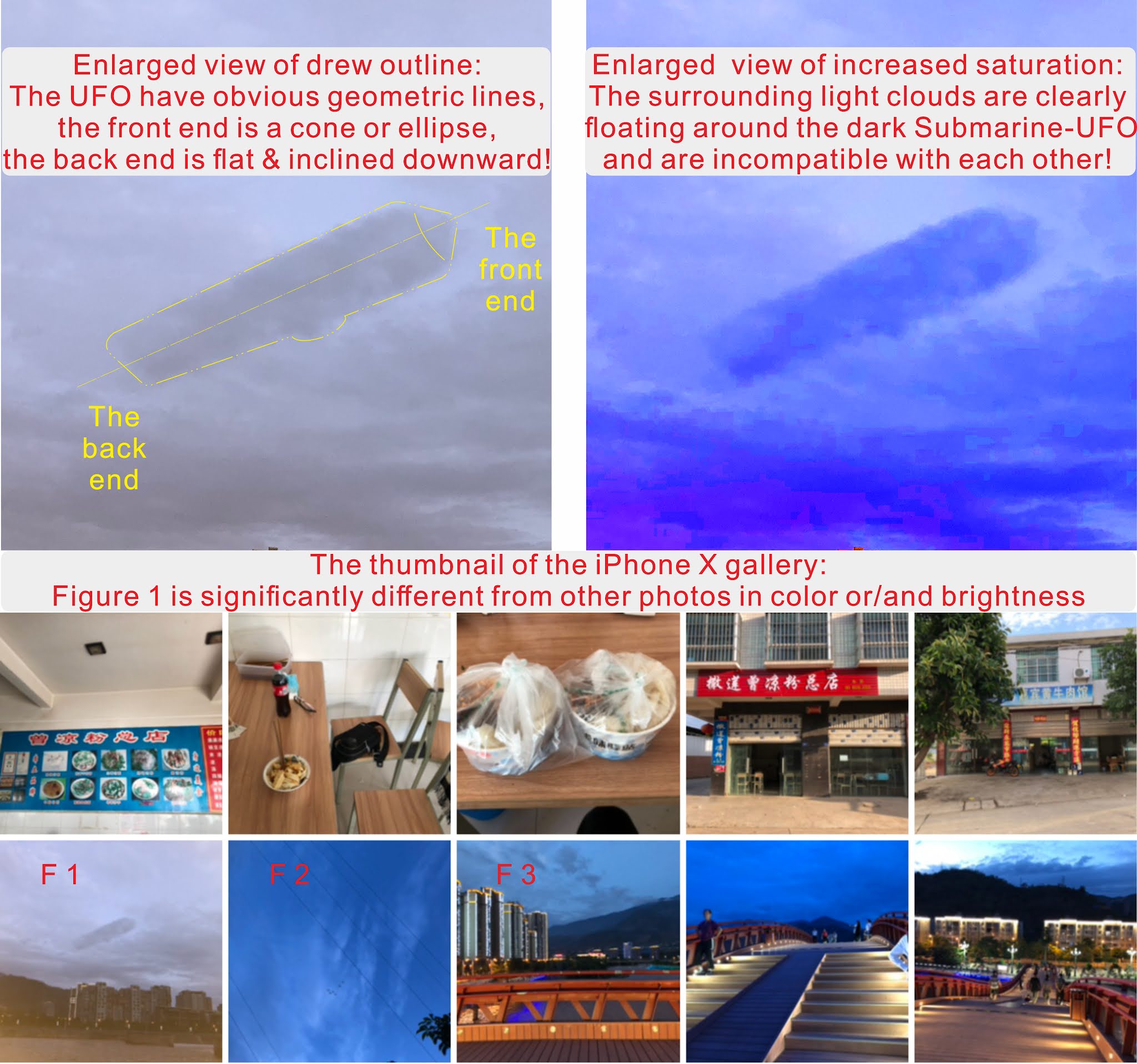 See below “Original Picture 2 (mobile phone number IMG_1632, 20:16 photographed)”. Mr. W saw a group of birds flying in the sky over the area, then using a mobile phone took pictures of the flying birds at the approximate position shown in Figure 2, but the traces of the Submarine-UFO were already gone. The local weather recorded on the Internet was “breeze, without continuous wind direction”. There was no surging wind and clouds were in a calm sky, and the UFO never re-appeared. 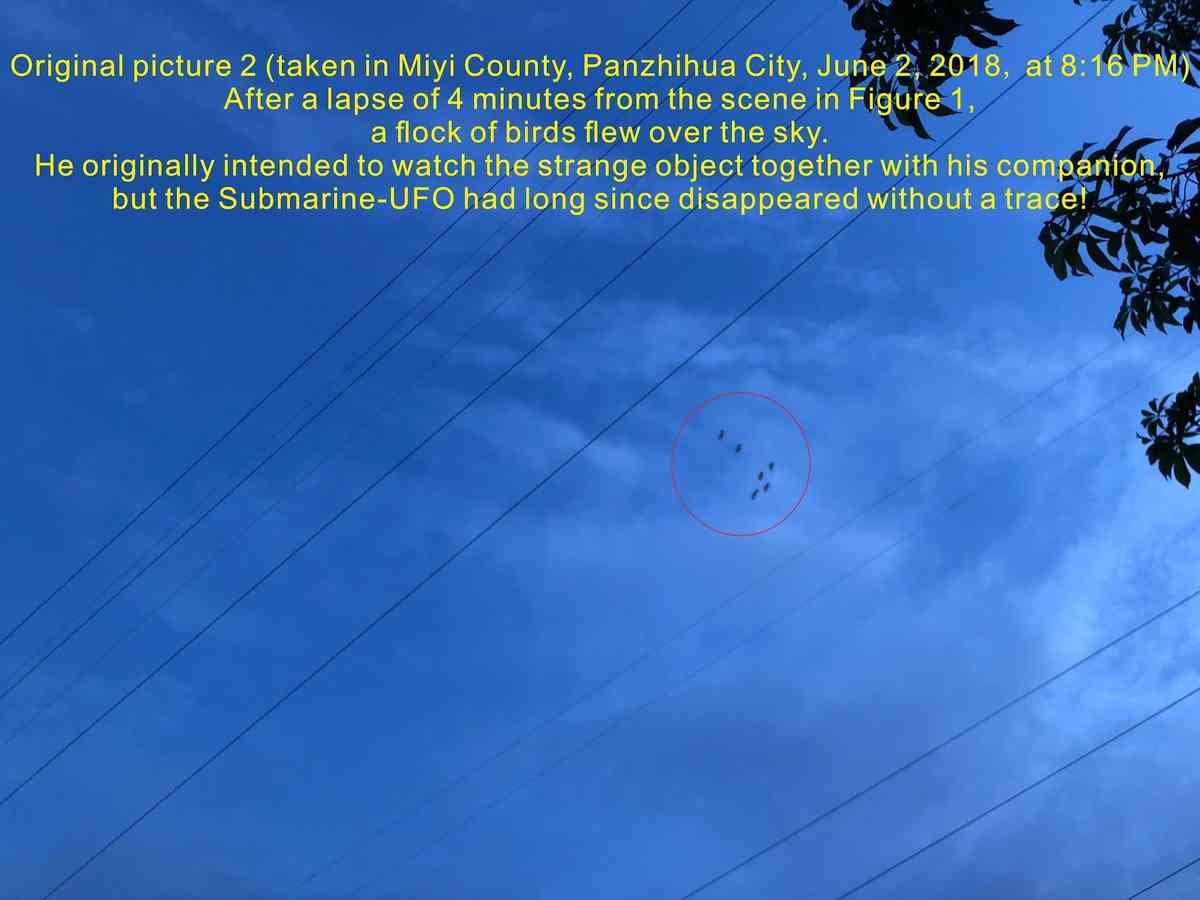 See below “Original Picture 3 (mobile phone number IMG_1633, 20:19 photographed)”. Mr. W and Ms. B walked to the highest point of the Dragon Bridge, using their mobile phones, they took pictures at the location shown in Figure 3 facing the direction they had just come from. At this time, the colorful lights on the building were brilliant and colorful, and the night was very charming, end. 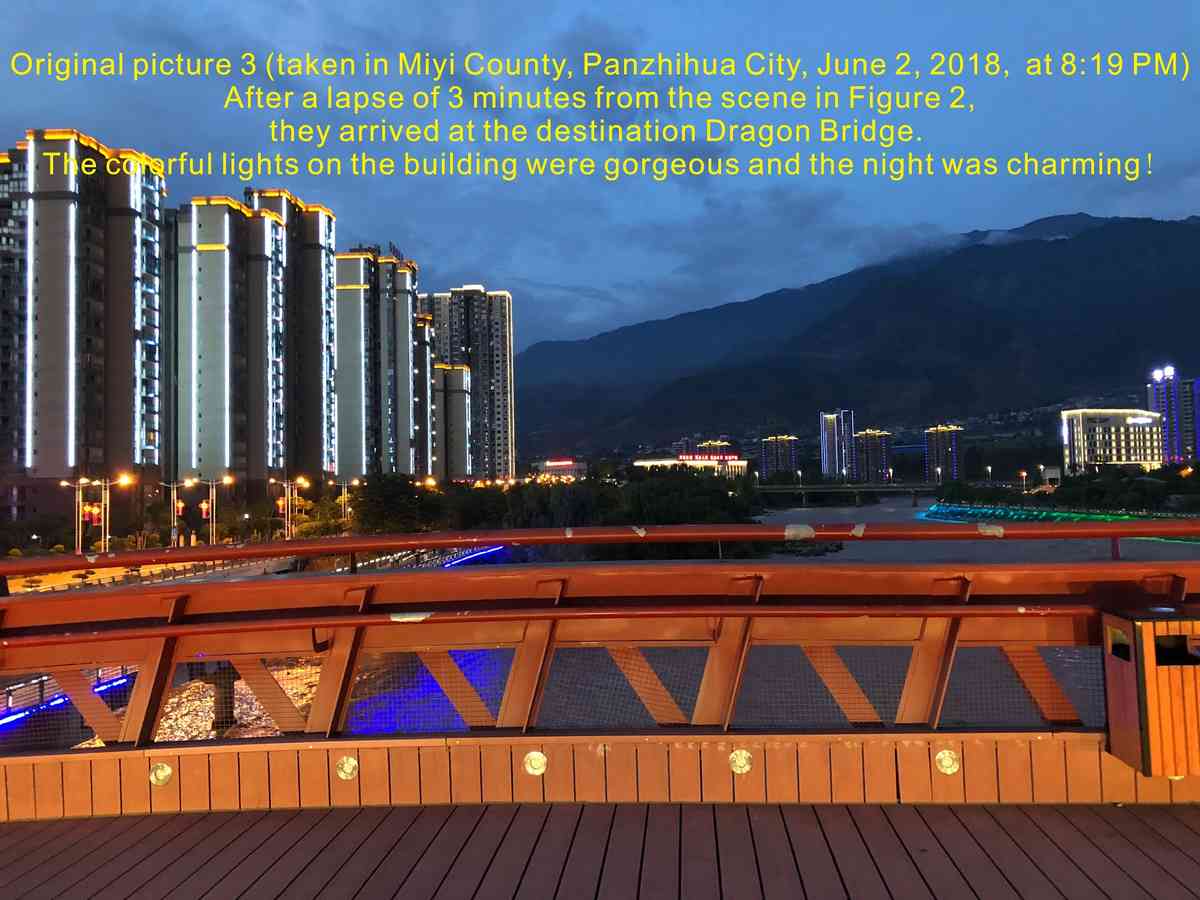 When consulted what condition could increase the luminance of a picture taken by iPhone X, the Chinese Apple customer service technician answered that the luminance of the subject itself increased. Relevant experts also believe that the flash of mobile phones will not affect the brightness of the distant view (especially buildings, the sky, and the Submarine-UFO on the other side of the river). 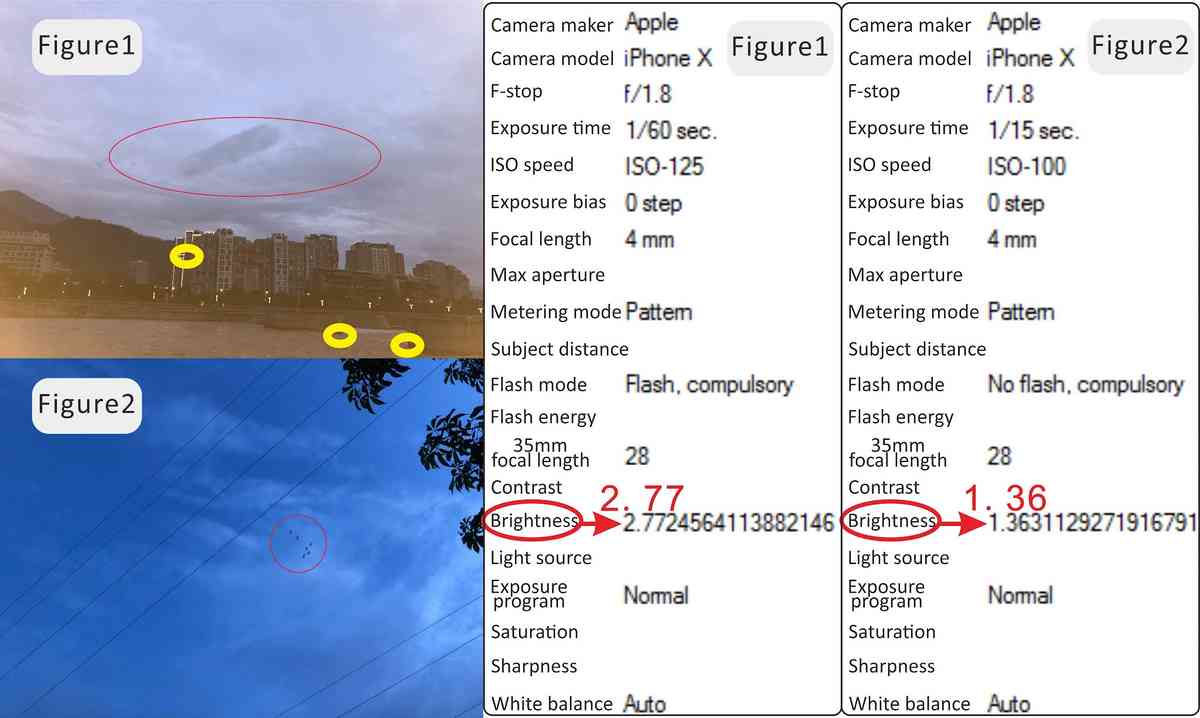 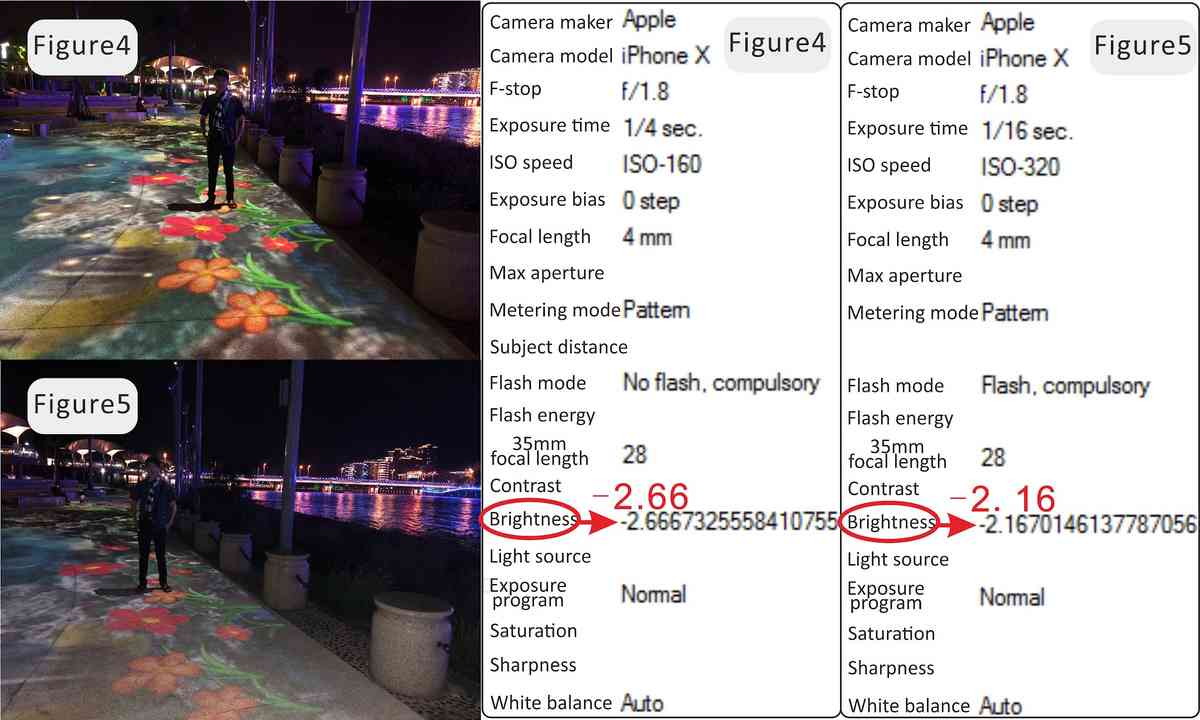